Apply to these jobs

London Skyline - Construction in the Capital

London’s skyline: Construction in the Capital

London is the UK’s biggest city, the centre of business in the country, and is home to over 8 million people. That’s 12% of the UK’s population. It is a city at the forefront of many industries, like finance, technology, and construction.

Construction in London is booming, with new developments and breathtaking projects commencing each year. Over the last 20 years, the city’s skyline has seen a massive change, with structures like The Shard and The Gherkin shooting up and dwarfing each other. In this roundup of London’s next biggest skyscrapers, we’ll fill you in on what is to come, and how it compares to what has been built around the world.

Construction in London can be split into two categories; residential and commercial.

Residential construction is a hot topic right now. The UK is experiencing a major housing shortage. The effect of this in London and the rest of the country is rising house prices. In fact, house prices in London have seen an average increase of 250% in the last 20 years.

The graph below shows how the average prices for different property types have risen in this time. The continuous increase in the price of properties has resulted in a significant decrease in the number of people that purchase properties by an average of 50%. It is vital that enough new homes are built in London to take pressure off of the limited housing market.

Commercial construction has very different drivers to residential. As London is the heart of business in the UK, having office space in the city is highly desirable. Not just for operational reasons, but also as a mark of prestige and status.

Some of the biggest and most ambitious new construction projects planned for London, both residential and commercial, involve building new skyscrapers. But why are skyscrapers becoming more and more popular? Below are some of the advantages of building high, and you can see the appeal…

The space issue - Building up instead of out means that you get a lot more space while taking up less land. This is a massive benefit, especially in a dense city where the majority of the land has already been built on. In central London, skyscrapers allow developers to deliver thousands of square feet of space, in a relatively small area. The Shard, for example, has 1.2 million square foot of floor space over 95 floors.

Creation of jobs - Skyscrapers are not simple structures to build, and they require many workers of many different specialisms to complete. A large construction project in London can create regular work for thousands of people.

Tourism and other uses - London’s tallest buildings aren’t used solely for office space. Hotels, restaurants, and tourist attractions take up plenty of space inside The Shard, The Gherkin, and more. The most spectacular buildings are often extremely popular tourist spots, which further stimulates the economy.

However, there are also downsides associated with such structures…

Sky high costs - It isn’t cheap to build a 300-meter tall building in the middle of one of the world’s biggest cities. Planning, labour, materials, logistics, machinery, and more all have to be considered. These costs can go up severely if projects are delayed or plans have to be changed.

Mistakes can be disastrous - One single mistake in planning or any other stage of the project can cause massive issues later on. An error during planning could compromise the safety of the building incur significant extra costs to correct. However, robust and comprehensive processes exist to ensure mistakes are identified and corrected.

Our top 5 buildings planned for London 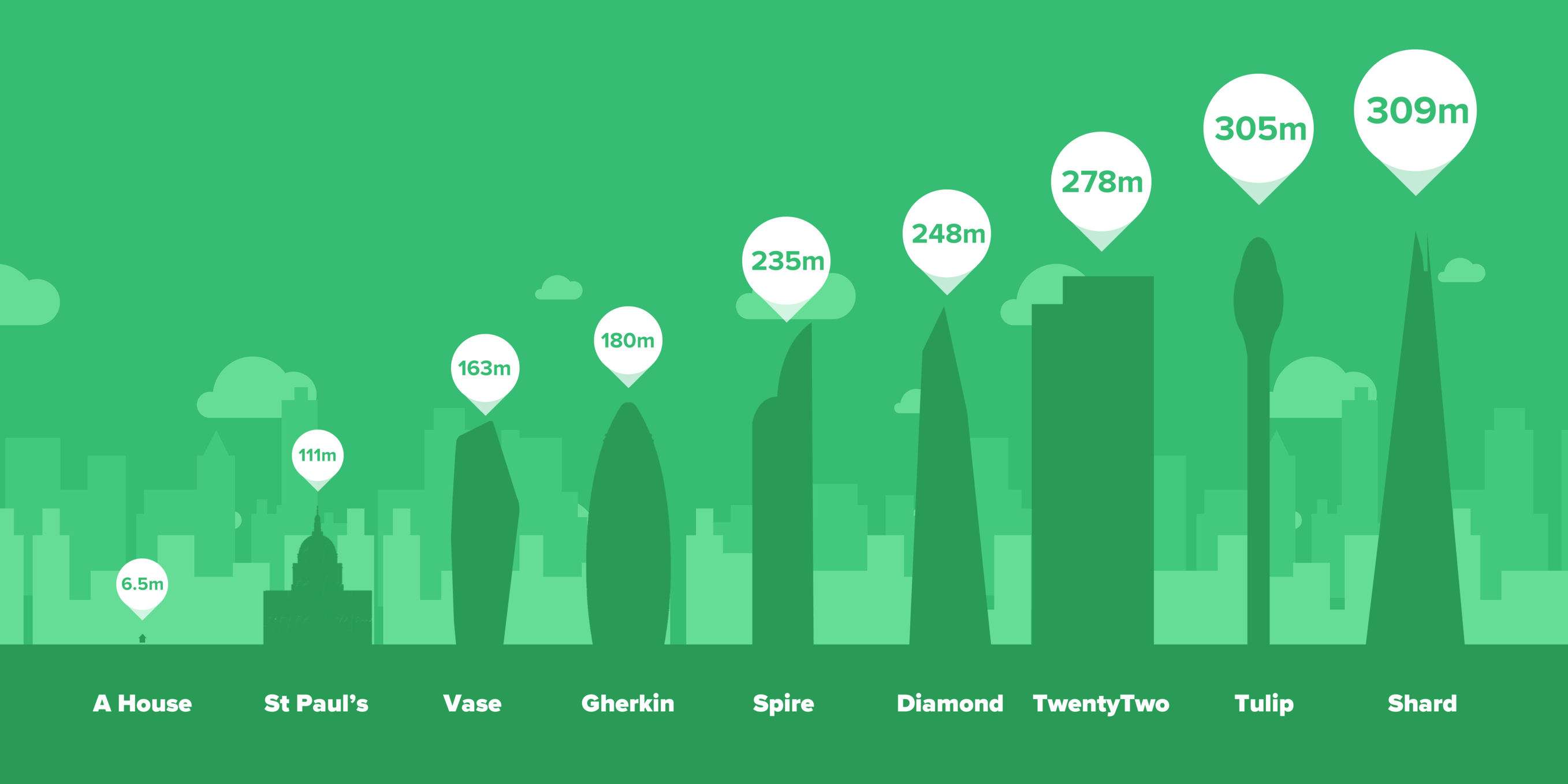 The Spire is a new residential tower that began construction at the end of 2016. It is located in Canary Wharf at 2 Hertsmere Road. This new tower will reach a height of 235 metres (771 feet) with a total of 67 floors. The project is expected to cost a total of £800 million and is predicted to be completed in 2020.

The Spire will be used mainly for residential apartments. A total of  861 suites will be built, ranging from one to three bedroom apartments and penthouses. The spire will also house a luxury five-star hotel with pool, gym, spa, bar and cinema.

This new tower is set to be the tallest consented residential tower in Western Europe. In July 2016, demolition of the existing structure began. January 2017 saw piling begin, and then by summer 2018, construction of the tower had reached the halfway point. After the events of the Grenfell Tower tragedy, construction halted while changes were made to improve the safety of the building.

One Blackfriars, also known as ‘The Vase’, is a new residential and commercial tower that began construction in 2013 at 1-16 Blackfriars Road. This new skyscraper reaches a total height of 163 metres (535 feet) with a total of 50 floors. The tower, which costs a total of £140 million, was completed at the end of 2018.

The Vase is comprised of residential apartments, a hotel, retail units and a public space. There is a total of 274 apartments in a range of sizes, and the hotel has 161 rooms. Underneath the tower, three floors contain a spa, gym, cinema, golf simulator and winery.

Originally, the tower was planned to be 225 metres (738 feet) with a total of 68 stories, but this was scaled down after concerns of the impact it could have on the rest of London. On October 2006, a revised design was submitted for the current height. 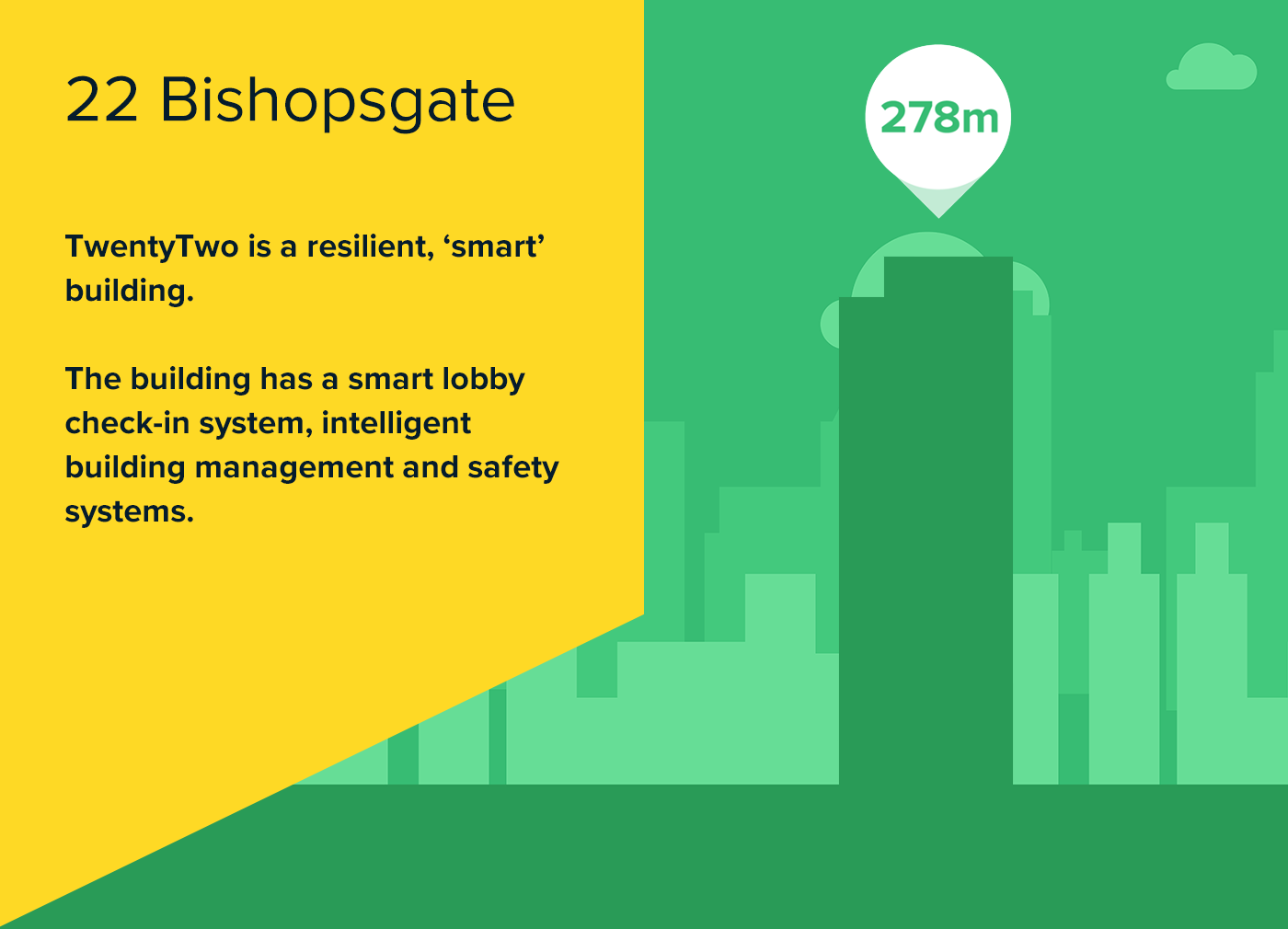 22 Bishopsgate, also known as ‘TwentyTwo’, is a commercial skyscraper that began construction in September 2016. TwentyTwo will reach a total height of 278 metres (912 feet) with a total of 62 floors (and two more in the basement). The tower will cost a total of £900 million and is due to be completed in 2019.

TwentyTwo will be used for commercial purposes and will have a total of 1.2 million sq feet of office space. The tower will also include:

In 2006, original plans were made for a building called ‘The Pinnacle’. Construction commenced, but it was halted due to the financial crisis and for four years the first seven floors were abandoned. During this time, the planned structure was redesigned. In 2016 it was confirmed that a new building would be built on the existing foundations, due for completion in 2019.

The Tulip will be a 305 metre (1000 feet) tower in Bury Street, adjacent to The Gherkin. Construction is not due to commence until 2020. The estimated cost of the project is between £500 million and £700 million, and completion is due for 2025.

The Tulip is being built for multiple purposes and will contain office space and an education centre. Pitched as a tourist attraction, there will be gondola pods that move in a loop on each ‘petal’, providing excellent views of the city.

Due to the height of the tower, The Tulip has had trouble securing planning permission. London City Airport has expressed concerns about disruption to flight paths. However, updates to the runway should allow construction of the tower to begin.

100 Leadenhall, also known as ‘The Diamond’, is a commercial skyscraper to be built at 100 Leadenhall Street. The Diamond is planned to reach a height of 248 metres (813 feet) with a total of 56 floors. A key feature of its unique design is the facade made of elongated diamond shapes. The total cost of construction is expected to be £1.5 billion, due for completion in 2027.

The majority of the skyscraper will be used for offices, providing a total of 1.1 million square feet of space. The ground floor will be used for retail, and The Diamond will also have a free public viewing gallery on the 55th floor, providing 360-degree views of the city.

Once construction has finished, The Diamond will be the third tallest skyscraper in London. The site is currently occupied by existing buildings, but once leases expire in 2023, demolition can take place and construction can begin.

Sign up with Coyle and let us ﬁnd your perfect job!

Call or email us with any queries

Coyle offer a nationwide service to job seekers and employers

Find an office near you

As part of our committment to excellence, helping our candidates and clients get what they need quickly and easily is very important to us. If you need help or advice we're always just a phone call or email away.  Follow us on social media or join our newsletter for ongoing recruitment advice and guidance articles.